Choosing an Internet Phone or VOIP

Choosing an Internet Phone or VOIP 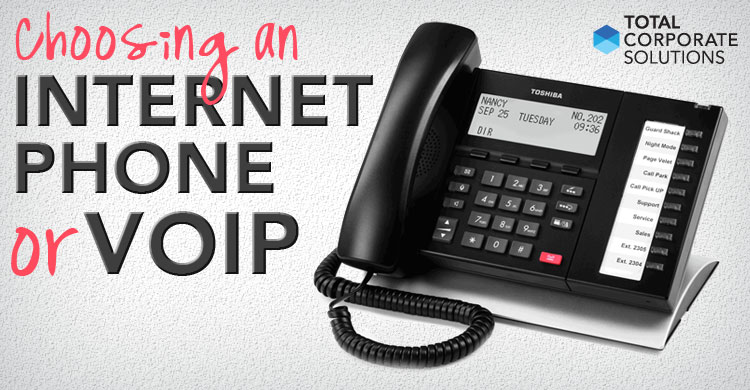 In any company situation, regardless of whether it is a small business or a larger corporation, there is always a focus on achieving the greatest functionality with the least amount of investment.Â  Most owners are aware of the fact that smaller expenses for sustaining business operations can create a larger impact on overall returns.Â  For this reason, many companies are exploring the solutions that technology has to offer, in order to achieve greater efficiency.

Information transfer and communications are integral to the process of growing a company.Â  This can include electronic messages, digital records, and other text based communications, but actual dialogue is also a part of expanding the reach of the company.Â  Since many businesses already rely so greatly on networking to facilitate the stream of work, the obvious move to an internet based phone or VOIP technology can be an appropriate move.

Voice over Internet Protocol (VOIP) has been in use for over a decade, although its popularity has risen as a result of:

This is largely due to developments in the software that powers the process, and can also allow user to format their VOIP settings to meet specific business needs.

With VOIP, the existing network is used to transmit verbal conversations on a designated channel that is linked to, but essentially runs parallel to other data transmissions.Â  The software that is used to generate the system is essentially what allows for the scalability of use, so it can be important to consider compatibility, especially if the company is considering expansion.Â  However, even basic VOIP software can still handle the routing of calls and the manner in which this is managed.

Some of the features that can be available with VOIP software include:

Along with lowered cost for operation and minimal fees for international calls, VOIP software can provide solutions for a number of corporate needs, while also requiring minimal hardware since the process in mainly program driven.Â  Many companies are even able to transition to VOIP primarily with software installations.

The Basics of Voice Over IP

Voice over internet protocols is essentially the term that is used for the actual verbal communications that are transmitted over the internet.Â  Early versions of the concept tended to utilize more hardware, as these items were programmed to garner the same effect as modern VOIP software.Â  The biggest difference is that while a separate router for VOIP communications had been required to create that secondary channel in the network, currently this can be achieved through software applications alone.

In many case, voice over IP can be as simple as an application download, although companies will also want to learn about the support and scalability options of any program, as management configurations, workstation monitoring, and other specific features may be more important to one business than another.Â  This can make it highly important to have voice over IP software that can manage the volume of calls and data transfer that is needed.

In some cases, companies may need to scale up their internet provisions when deciding to transition to voice over IP.Â  While the improvement to the programming does give companies a number of options in use, the internet provider will still be responsible for the speed at which the data is transferred.Â  In this type of situation, a slow connection or low data transfer rates can translate to static and lag time in conversing.

The Benefits of Internet Telephony

Although the terms of VOIP and internet telephony are often used interchangeably, they are technically not the same thing.Â  Internet telephony refers to the basic concept of utilizing the internet to transmit voice messages.Â  VOIP is a part if the program that makes this possible. Internet telephony is more focused on the actual hardware that enables the voice over internet protocols.

At its most simple, internet telephony can include VOIP systems that are basically plug and use.Â  Much of the hardware will combine a router within the base and the handset and this can include things like an IP phone or a soft phone.Â  These devices can plug into a PC and allow the user to make calls through the network.Â  Billing costs and geographical constraints are still considerably lowered, although internet telephony is designed for business needs, with the ability to expand services through the software, once the hardware is in place.

What Are the Differences Between the Two Technologies

Are There Advantages for Certain Situations in Using Internet Telephone or VOIP?

Larger companies will tend to opt for internet telephony, as this is not only designed with businesses in mind, but provides a complete system for communications that is integrated with the existing network.Â  This also means that the provisions of both hardware and software can result in less of learning curve for accessing the full benefits of the system.

Smaller and even mid-sized companies may choose VOIP through a download or an app, and be able to find equal benefits that also fit budget and needs.Â  In these cases, the ease of use for VOIP software is often a positive point, but lower call volume and lesser data transfers can also make this highly viable for small businesses to use with their existing internet.

How to Use a Customer Service Survey to Boost Your Business